HISTORY was made at Korora Lookout yesterday with the official opening of an indigenous, interpretive walking track.

In a first for state forests in NSW, Forestry Corporation’s Coffs Harbour-based strategic projects and programs leader Justin Black said the 400-metre walk, re-named the Gumgali Track, was transformed in collaboration with with Gumbaynggirr Elders and local artists.

“Long before it became a tourist attraction, the natural escarpment perched above Coffs Harbour and its remarkable views out to sea were an essential part of Gumbaynggirr culture and we’re proud to be able to showcase Aboriginal cultural heritage and importantly Gumbaynggirr language through the Gumgali Track,” Mr Black said.

“This is the first time we’ve developed anything like this in any NSW State forest and we’re excited to be able to share it with both the local community and visitors to our region.” 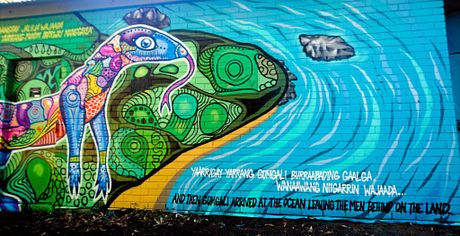 Local artists, Ash Johnson and Yowa painted a series of dreamtime murals to visually tell the story of the Gumgali.
Contributed

“The Korora project is important as it’s an opportunity to open up the potential for our youth, engaging them in culture while bringing the whole community together,”Uncle Flanders said. The walk was developed over several months and features three timber sculptures, a 30-metre mural as well as soundbar that allows people to listen to Gumgali’s story in Gumbaynggirr language and English.

The Dreamtime story of Gumgali, the black goanna, was also painted on the walls of the Telstra and Optus buildings at the site by local artists Ash Johnson and Yowa.

International students also pitched in to help rebuild parts of the Korora Lookout in July. 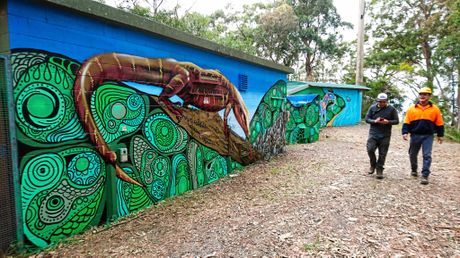 Local artists, Ash Johnson and Yowa painted a series of dreamtime murals to visually tell the story of the Gumgali.
Contributed